It was my turn for bread run tonight (our local collect and distribute from Brumbies unsold bread) and I was loading the bread into the Ikea bags we use to transport the bread.

The variety of bread now available even from franchise stores such as Brumbies is amazing - from light crusty breads through to rich dark rye and sourdoughs.

I love bread - the smell the feel and the texture. There is something earthy and elemental about it and wherever I have travelled I have enjoyed the local bread as a reliable, cheap and filling food. 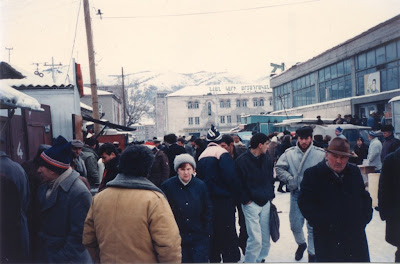 I particularly remember the long sheets of lavash piled high in the markets in Kirovikan in Armenia. It was sold by weight - I think at the time around 240 Roubles per kilo, which was high, even when you factor in the inflation rate at that time. This was about 40 cents to us so we could afford to by a lot of bread if we needed to.

Armenia was also the place in which I learned to love coffee and yet I cannot once recall seeing it in the markets - I remember what I did see, the fruit, the eggs, the enormous mounds of cabbages and potatoes, the bread and the few vendors with dried sausages - at exorbitant prices. The great thing about the sausages though was that they could be shaved very thinly and used to flavour soups or thinly layered in lavash with the local cheese that was in the form of a long dried stringy rope – and very tasty.
Fruit was expensive – up to 1200 Roubles a kilo at one point. It was all brought in small loads across the border from Georgia – you’d call it smuggling except that it was carried fairly openly which was not a problem as long as you had the correct bribe for the border guards.

I have no idea where they got their coffee from! 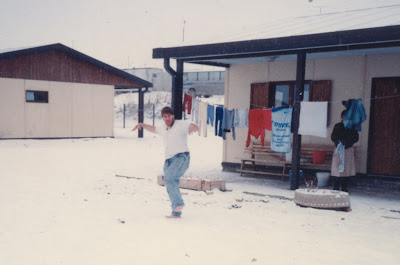 This irritates me now, I should have paid attention, but as I knew little about coffee and was only in the process of being initiated into the local social rituals about the drinking of coffee I guess I just didn’t ‘see’ what I was looking at.
A 'Snow Grendel' testing his barefoot-in-the-snow endurance (a wussy 32.3 seconds I think)
Posted by "Grendel" at Saturday, November 08, 2008 No comments: